Prof Stephen Hawking has been honored on a new 50p coin inspired by his pioneering work on black holes.

The physicist died last year at the age of 76, having become one of the most renowned leaders in his field.

He joins an elite group of scientists to have appeared on coins, including Sir Isaac Newton and Charles Darwin.

Designer Edwina Ellis said: “I wanted to fit a big black hole on the tiny coin and wish he was still here chortling at the thought.” 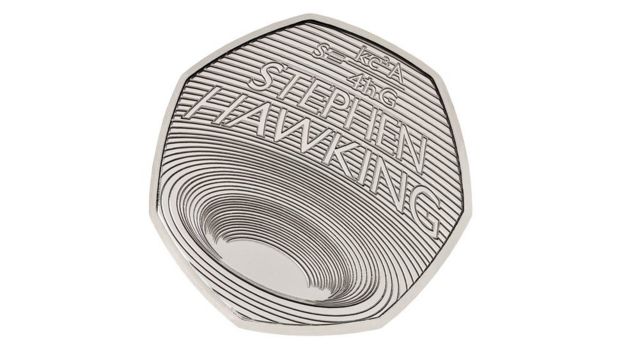 She said she wanted to reflect the way he “made difficult subjects accessible, engaging and relatable”, in particular on black holes.

Prof Hawking’s daughter Lucy visited the Royal Mint with her brother Tim to see the coins.

She said: “It is a great privilege to be featured on a coin and I hope my father would be pleased to be alongside Sir Isaac Newton and Charles Darwin as scientists who have made it on to money.”

He once told the BBC he thought his discovery that black holes were not entirely black would be his “greatest achievement”.

At the age of 22 Prof Hawking was given only a few years to live after being diagnosed with a rare form of motor neurone disease.

The illness left him in a wheelchair and largely unable to speak except through a voice synthesiser, but he rose to serve as Lucasian Professor of Mathematics at Cambridge University for 30 years.

After his death on 14 March 2018, crowds lined the streets to bid farewell.

Prof Hawking has also been suggested as the new face of the £50 banknote, which will feature a scientist. A decision will be made in the summer. Courtesy:BBC