England were crowned world champions despite a tied Super Over against New Zealand in a nail-biting World Cup 2019 final at Lord’s on Sunday. This was the first time a Super Over was used in a 50-over World Cup final.

Ben Stokes had starred with an unbeaten 84 but his heroics were not enough as New Zealand held on to a thrilling tie. Lockie Ferguson and James Neesham struck crucial blows at the death while Trent Boult conceded 14 in the final over when England needed 15 to win the title clash without having to go to the Super Over.

In the Super Over, England sent in Ben Stokes and Jos Buttler to face Trent Boult and the pair managed 15 runs.

Jofra Archer bowled the Super Over for England and did an excellent job, restricting the Kiwis to 15 to trigger massive celebrations in the stadium and all around the United Kingdom.

This one has to go down as one of the best finals in the history of Cricket World Cups. Both teams played high attrition cricket on a pitch where run-making was not always easy. England’s pacers Chris Woakes, Jofra Archer, Mark Wood and Liam Plunkett were brilliant upfront before Lockie Ferguson bowled a sensational final spell to produce some thrilling moments in the World Cup finale.

Chasing 242, England openers Jason Roy and Jonny Bairstow got off to a nervous start. But the pair appeared to break the shackles soon enough before Matt Henry removed Roy for 17 in the 16th over.

Joe Root was inexplicably slow and the pressure of a run chase in a World Cup final got to him. He played a couple of poor shots against Colin de Grandhomme before edging the same bowler to Tom Lathan in the 17th over.. 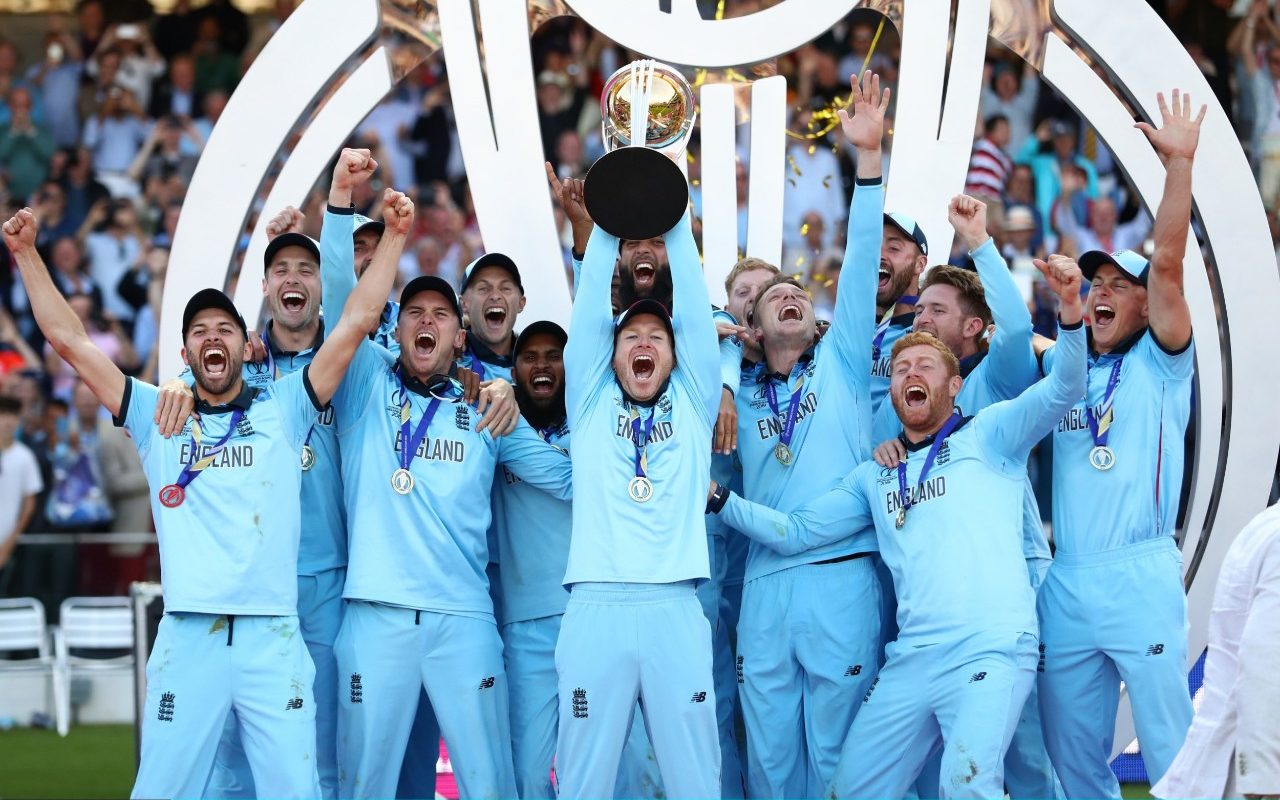 Jonny Bairtsow wanted to anchor the England innings but New Zealand were cock-a-hoop when Lockie Feguson removed Bairstow with a back of a length delivery. Eoin Morgan smashed the first ball from James Neesham and was spectacularly caught by Ferguson near the point boundary.

With the required rate soaring up, England needed a special effort from Ben Stokes and Jos Buttler. Stokes had played a couple of heroic innings but England had failed to cross the line against Sri Lanka and Australia.

The stakes were high for England on Sunday and Stoke was at it again for his country. Jos Buttler had a middling World Cup before the final; moreover he was not needed to bat in a few crunch games because the top-order had done the job.

On Sunday, both Stokes and Buttler were in complete control ever since they got together in the 24th over with 4 wickets down. At that stage, New Zealand had the upper hand but run-by-run, minute-by-minute, England inched closer to a historic World Cup triumph. However, there was a twist in the tale when Lockie Ferguson struck off successive overs in the death to remove a well-set Buttler and the dangerous Chris Woakes.

The onus of the chase was squarely on Ben Stokes and he did well to bring the equation to 24 off the last 2 overs.

Ben Stokes was on fire but he kept losing partners at the other end. James Neesham struck twice in the penultimate over to remove Liam Plunkett and Jofra Archer – England needed 15 off the final over.

Boult bowled two dot balls but Stokes hit a six off the third ball before England got 6 lucky runs in a tense final over. With 2 needed off the last ball, Mark Woord was run when Stokes called for 2. Scores were tied at 241 and this became the first ever 50-over World Cup where the champions were decided via a Super Over.

England had to wait for another 27 years before their next chance. In 2019, England were touted pre-tournament favourites but in the middle of their campaign, successive defeats to Sri Lanka and Australia, had made the hosts nervous. However, England got back on their feet with victory over India.

New Zealand were playing their second successive World Cup final. In 2015, Australia’s pacers had blown the Black Caps away but this year, the Kiwis were far more determined and wanted to do better.

After winning the toss, Kane Williamson decided New Zealand would bat. Their openers Martin Guptill and Henry Nicholls were woefully out of form but they needed to give New Zealand a strong start in overcast conditions against a top-quality English bowling attack.

Martin Guptill looked like he had come into his own with a couple of good looking shots but he fell to Chris Woakes. It was slow going for Nicholls and Williamson but the pair calmed nerves in the New Zealand dressing room with a 74-run stand for the 2nd wicket.

Liam Plunkett struck in the 23rd over to give England the big breakthrough – Kane Williamson edged it to wicketkeeper Jos Buttler and that alowed the hosts to make a strong comeback. Plunkett struck again in the 27th over to send back Nicholls.

Ross Taylor was unlucky to be given out LBW to Mark Wood but New Zealand had lost their DRS when Guptill used it in a poor moment of decision making. Tom Latham hit 47 and shared important partnerships with James Neesham and Colin de Grandhomme to help New Zealand reach a respectable total. Courtesy:IndiaToday