A “dramatic” fall in car production and an easing of stockpiling by manufacturers meant the economy shrank in April, official figures show.

The economy contracted 0.4% from the month before, according to the Office for National Statistics (ONS).

The contraction meant growth for the three months to April slowed to 0.3%.

Factory shutdowns designed to cope with disruption from a March Brexit slashed UK car production in April by nearly half, the industry said last month.

‘Hangover’ The economy had seen a spurt of growth in the run-up to the proposed March date for the UK leaving the European Union, as manufacturers stockpiled parts, raw materials and goods in the anticipation of holdups at the border.

After the Brexit deadline was extended to October, it suffered the reverse effects as these supply reserves were used up and fewer purchases were made.

“Today’s figures signal the UK economy is likely to experience more subdued growth for the rest of the year, marred by Brexit uncertainty.”

ONS statistician Rob Kent-Smith said: “Growth showed some weakening across the latest three months, with the economy shrinking in the month of April mainly due to a dramatic fall in car production, with uncertainty ahead of the UK’s original EU departure date leading to planned shutdowns.

“There was also widespread weakness across manufacturing in April, as the boost from the early completion of orders ahead of the UK’s original EU departure date has faded.” 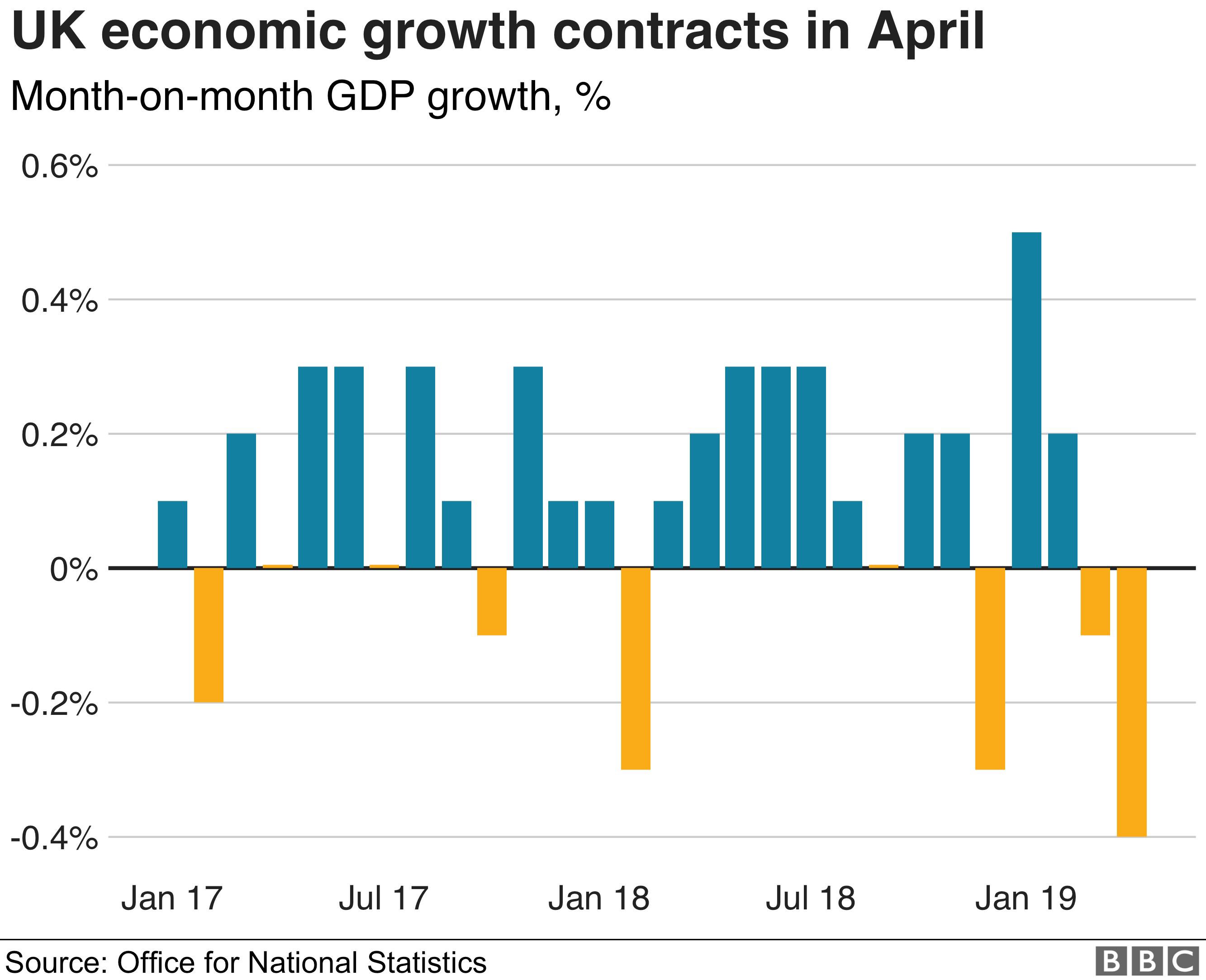 ‘Sluggish growth’ The contraction in April was far sharper than economists had expected.

“With the Brexit paralysis and a slowing global economy taking its toll, we doubt GDP will grow by much more than 1.5% or so in 2019 as a whole and expect interest rates to remain on hold until the middle of next year.”

The Society of Motor Manufacturers and Traders (SMMT) has estimated car production for the whole of 2019 will be about 10% down on last year. It says the market might pick up by the end of the year if there is a favourable deal between the UK and the EU, and a substantial transition period to adapt to trading outside the single market.

But it has said a no-deal Brexit will make the declines worse, with the threat of border delays, production stoppages and additional costs.

The Prime Minister’s official spokesman said: “While monthly figures are always changeable, the fundamentals of our economy are strong and it has grown every year since 2010. Employment levels are at a record high and wages growing in real terms.”Courtesy:BBC